The Evolution of Aviation in the Last Two Decades 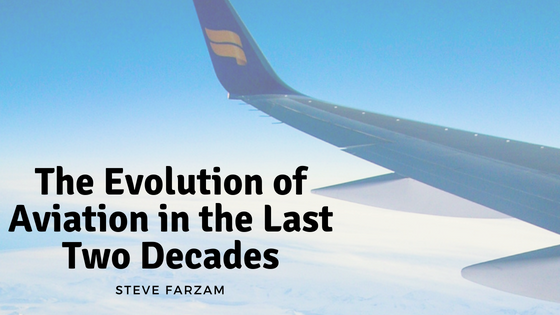 Twenty years ago, aviation and airline travel looked very different than it does today. Prior to the year 2000, flights were very cheap, partly due to a good economy and cheap oil, and most passengers received complimentary meals on domestic flights. In the early 2000’s, this changed. In an effort to cut costs, airlines stopped serving meals on domestic flights. This elimination was just the beginning of changes implemented in aviation and airline travel.

Before the turn of the century, security in airports was much more lax and oftentimes, security screeners were unable to detect potential threats in passengers luggage or on their person. This was in part due to the frequent turnover rate in the workplace – a result of poor wages and benefits, as well as inefficient training. After the horrific events that occurred on September 11th, 2001, many new policies and procedures were implemented in airlines. Most significantly, was the creation of the Transportation Security Administration, otherwise known as the TSA, to assist in guarding U.S. airports. Identification is now required and must match the airline ticket, shoes need to be removed at checkpoints, and all baggage, both checked and carry-on, have to be screened. Additionally, many items are now restricted from being brought onto the aircraft, including carrying on any liquid container larger than 3.4 ounces.

In 2002, bag screening devices were introduced to airlines to assist in bag screening. Then, in 2010, the screening process was increased tenfold with the implementation of Advanced Imaging Technology. These are full-body scanners that can detect non-metallic weapon explosives, as well as other threats that could potentially be concealed under layers of clothing. Passengers may also be required to go through an additional “pat-down” screening process. The result created longer lines and wait times moving through security. In an effort to speed up the process, passengers are able to complete TSA Pre-Check applications.

Prior to 2001, the cockpit in aircrafts were not nearly as secure as they are today. Now, the cockpit is completely sealed during the flight, with pilots locked tight behind impenetrable doors. Save for bathrooms breaks, the pilots do not leave the cockpit. Flight attendants are thoroughly trained to protect the cockpit during the times the pilots vacate.  Additionally, pilots are able to go through training to allow them to carry firearms, via a program called “Federal Flight Deck Officer”.

In addition to security upgrades and technology advancement, there have been some adjustments to the internal design of aircrafts. Many of the seatback screens, screens that are placed on the back of the seat for entertainment, are being removed for shorter flights. In place of these, some airlines are instead offering onboard streaming to allow users to use their own devices for in-flight entertainment. The legroom has also been cut significantly in many economy class seats. The average legroom is about 30 to 31 inches today. This summer, United Airlines will be adding an additional 21 seats to some of their domestic flights, further shrinking seat space, and other airlines have already implemented their own version of this project.