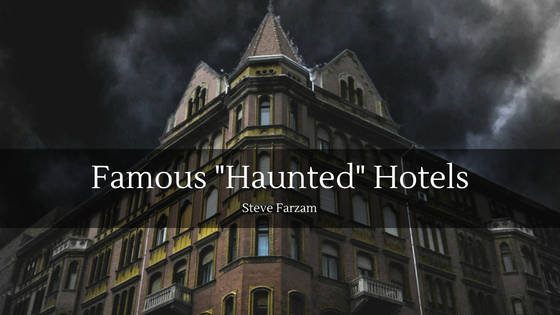 As summer comes to an end and the fall season approaches, that means Halloween is just around the corner. Whether you are a believer of the paranormal or enjoy the spooky festivities, if you seek a spectral adventure, one of these famous “haunted” hotels could be the place for you to visit. If you’re looking for an intimate getaway or a luxury accommodation, there is something on this list for every guest.

A member of the Historic Hotels of America, The Stanley Hotel was the inspiration behind Stephen King’s The Shining, after he and his wife, the only two guests, stayed there in 1974. If you’re looking for your spooky adventure, you can attend one of The Stanley Hotel’s ghost tours. They also throw a Murder Mystery dinner, Halloween Masquerade Party, and “The Shining Ball” during October.

The Bourbon Orleans Hotel is an iconic hotel located in the French Quarter. Before its conversion to a hotel in the 1960s, the building served as a ballroom and theater, followed by a covenant and an orphanage. The haunted stories are almost as old as the building itself. The ghosts that are claimed to roam these halls come from all different eras, including Confederate soldiers, children and nuns, and a lone ghost dancer, having been seen dancing under the ballroom’s crystal chandelier.

New York’s Hotel Chelsea was built in the late 19th century and has been a muse to artists for many years, including Mark Twain, Andy Warhol, and Ethan Wake. Not only are there many famous guests, but also famous ghosts, including writer Dylan Thomas, who died here in 1953 of pneumonia, and Nancy Spungen, the girlfriend of Sid Vicious of the Sex Pistols, whose death remains unsolved.

The Queen Mary is a legendary 1930s ocean liner now docked in Long Beach. The ship previously hosted Hollywood stars like Fred Astaire and Elizabeth Taylor, dignitaries, and royalty, including Queen Elizabeth and Winston Churchill. It became known as “the haunted ship” following a series of disasters, including a split hull that left only a few survivors. It is now a floating hotel, attraction, event and wedding venue, and the home to three world-class restaurants.

The Logan Inn was built in 1722 and is legendary in its Colonial-era town. One of the oldest, continually-operating inns in the United States, guests who have stayed at Logan Inn have heard the mother of a former owner, Emily, crying softly at night in Room 6, otherwise known as Emily’s Room.