Anatomy Of An Airplane 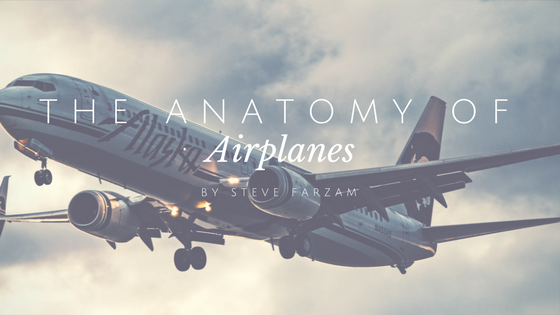 As technology advances, innovation follows. Throughout the modernization of aircraft, engineers have worked to make planes safer, quieter, and more convenient for passengers. Jet airliners have come a long way, but there will still be plenty of improvements to come. Take a look below at the basic framework of an airplane, including the interior windows and overhead bins as well as the exterior fuselage, wings, turbofans, and empennage.

When the first airliner entered service, it was constructed with square cabin windows. However, after two fatal accidents, investigators found that window corners contributed to cabin pressurization which deteriorated planes’ aluminum-alloy skin. Furthermore, they discovered rounded or oval windows prevent deterioration by improving the distribution of pressurization stressors.

As with most things, the overhead compartment has advanced since its first appearance. In the 1920s, passengers would hang lightweight items on overhead racks made of aluminum and netting, although these were only found about the rear seating. However, in 1969, the arrival of closing overhead storage bins became an industry standard.

While all parts of a plane are equally important, the wings generate most of the lift to hold the plane in the air. As the plane is pushed through the air to create lift, the air resists this motion, and a drag, or an aerodynamic force, transpires; as a result, winglets are tips on the end of the wing that reduce drag.

In efforts to decrease the engine noise and increase its efficiency, engineers began looking to revamp the airplane’s engine. The solution: turbofans. First appearing in the early 1960s, turbofans exhale cold air rearward, eliminating the mixing of the combustion chamber’s hot exhaust.

The empennage is the vertical and horizontal stabilizer and the tail of the airplane. It consists of multiple parts: the rudder, elevators, stabilator, and trim tab. The rudder is a movable piece that allows the plane to turn left or right when activated, and it is connected to the foot pedals in the cockpit of the airplane. The elevator is like the rudder in that it moves the aircraft up or down to make the nose of the airplane move in the appropriate direction. The stabilator is a large piece of material that doubles as a trim tab. The trim tab is a rectangular shaped piece of equipment on the trailing edge of the horizontal stabilizer. The tabs are used to be moved gradually by the pilot to make the aircraft easier to handle.