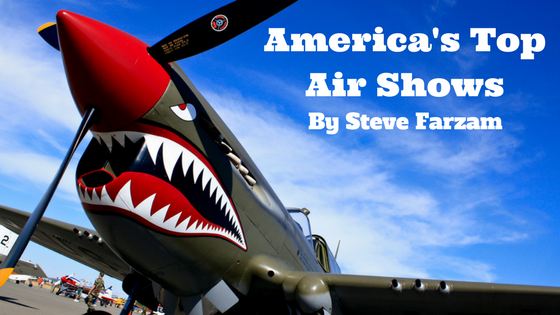 Many aircraft fly over the U.S., but only a select few partake in the top shows. These airshows can be categorized by history, culture, and specialty.

Aviation has a wonderfully storied past, and as a result, attendees at air shows expect a bit of  history. Enthusiasts prepare throughout the year to display their collections. The best historically themed shows include Planes of Fame Air Show in Chino, California; National Warplane Museum Airshow in Geneseo, New York; and the Mid-Atlantic Air Museum WWII Weekend in Reading, Pennsylvania.

There was a time when pilots were looked upon as celebrities, and this celebration of aviators remains alive and well in many parts of the country. Among the best of culture-driven events in America are Wings Over Houston Airshow in Houston, Texas; Great Tennessee Airshow in Smyrna, Tennessee; and Cleveland National Air Show in Cleveland, Ohio.

The state of Florida hosts numerous airshows, as the weather allows spectators and pilots to enjoy themselves throughout the year. Two of the most highly regarded annual airshows are Fort Lauderdale Air Show in Fort Lauderdale, Florida, and SUN ‘n FUN International Fly-In & Expo in Lakeland, Florida.

Some shows only come together when pilots’ schedules allow for it. Daytona Beach, Florida hosts one of these: It is not an annual spectator event, but instead the gathering of aviation enthusiasts. Expect such events to fly every other year or so.

There are airshows and then there are air races, and few people know about these races even though they are global events. Reno, Nevada hosts what is regarded as the very best in air racing—the National Championship Air Races. The race is a show unto itself, but the weekend long event also hosts demonstration teams.

Most airshows occur over a weekend. However, one known throughout the aviation community is a fly-in, week-long gathering. Often referred to as just “Oshkosh”, it popularized the town for which it is named. EAA AirVenture Oshkosh is by far the most widely recognized airshow of all time. It’s actually less like a show and more like a vacation! Spectators are not there for the day. They come to spend time in the town of Oshkosh for this one week out of each year.