3 of The World’s Most Touristy Cities 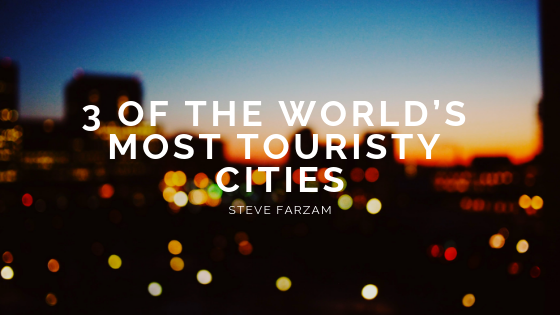 Traveling the world means that sooner or later you’ll become a tourist. Of course, there’s nothing wrong with this, but it’s an essential factor to keep track of because of how many other people are doing the same thing. Being a tourist can be a great way of vacationing and experiencing cultures and lifestyles that you might not be familiar with, allowing you to broaden your understanding of the world.

Depending on which cities you go to, though, there will undoubtedly be more or fewer tourists crowding the overall area. To help you understand which cities are the most tourist-filled, I’ve provided a list containing 3 of The World’s Most Touristy Cities.

Being a part of the 7 Wonders of the World, it’s no surprise that the famous Egyptian pyramids are a huge draw that attracts people from all over the world who travel to see what is arguably one of humanity’s most impressive achievements. There are also incredible views of the Nile River to be had in Giza, along with excellent food and absurd amounts of tourists surrounding you.

As Italy’s most-visited tourist destination, Venice has enough people coming in and out of it to visit for it to be ranked among the largest tourist destinations in the world. Not only is there an incredible amount of history associated with Venice, but the city’s design of being on the water will forever be a draw for people mystified by how it ever come to exist. This is even intensified during the Carnival in February and the summer months as many people flock from around the world to soak up the culture.

This may seem like an unlikely contender for the most popular tourist destination in the world, but there is indeed a precedent—Cancún is a trendy destination for many different types of tourists, mainly citing the weather and laissez-faire style that allows people to take a relaxing break from the business of their daily lives.

Want to learn more about the Top Most Touristy Cities? Check out this list for seven other cities that didn’t make the cut for the Top 3!